The entire Enztal Cycle Path runs from the source of the Enz River in the northern Black Forest near Enzklösterle to where it flows into the Neckar River in Walheim. We ride the cycle path upstream and start from the scenic part in Neuenbürg.

The track is filmed appropriately for the season in beautiful autumn weather. This is also the first video that contains information about the respective track surface, so that it can be simulated with suitable software (Incyclist). This is also shown in the altitude profile.

Lom starts at the end of Sognefjellet RLV and follows the road back over the top of the mountain (and the highest mountain pass in Northern Europe), down into the Bøverdalen valley and finally ends in the town that gives it its name. The climb from Galdesand to the Juvasshytta alpine resort (generally called "Juvass") is generally considered to be the hardest climb in Norway. There are longer climbs, and there are steeper climbs, but this 13 km climb averaging at 10% is a real challenge.

These two routes belong together in a way and are therefore also available in a favorable double pack.

I have lowered the prices for further 5 videos. This also makes the two double packs La Palma and North-Baltic-Sea-Canal cheaper.

In addition, the new recording of the Rhine cycle path from the Rhine bridge Wintersdorf to Speyer appears, replacing the 10-year-old recording. Accordingly, the quality is outstanding, probably even the best available on the market.

I have lowered the prices for 5 older videos. In addition, I will remove the RLVs Valley of the Tears and Bäderdreieck from the program at the end of the year.

Jöhlingen takes us into the landscape east of Karlsruhe, which is characterized by a completely different topology than in the other directions. Instead of gentle hills, a multitude of short, poisonous climbs await us here. Nevertheless, the total number of meters in altitude is moderate.

The second route takes us in Saxony from Freiberg to the Dam Malter and with a small loop back. The dam was built at the beginning of the 20th century to regulate the water of the Red Weisseritz. The route is very hilly with sometimes steep short ramps.

In the meantime, the 2nd and 3rd quarters of 2022 have been completed. Although in both quarters (together) too little was donated for compensation (the participation was with just under 18% as low as never before), but thanks to a special donation of 3 euros and especially through the compensation for my film trips (alone for the Pyrenees shots I have traveled almost 4000 km) a total of 1390 kg CO2 can be compensated.

After the corona-related travel restrictions, there is finally new footage this season, especially from abroad. And there are many highlights!

At 2115 meters above sea level, the Col du Tourmalet is the highest paved road pass in the French Pyrenees. We conquer the "Giant of Provence" from Bédoin in the southwest over about 21 km and a good 1500 meters in altitude. The Brocken (also called Blocksberg) is with 1141 m above sea level the highest mountain in the whole of northern Germany. In the new recording of the Challenge Roth Triathlon, in contrast to the 10 year old video, the total distance, i.e. both laps, was now filmed. And last but not least the second part of the Salier- and Kaiser-Konrad-Cyclepath, which connects the German Wine Route with the Rhine. In addition, there are of course again both parts in the discounted double pack.

I have also put together some new package offers. So there is finally a season package again, the download package mixed is completely new and also the triathlon package contains all new versions.

Incyclist trainings for the leaderboard 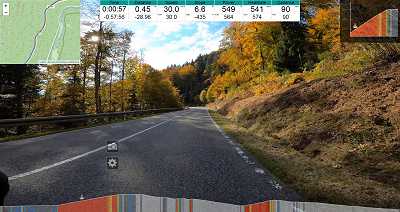 From now on, Incyclist training files can also be uploaded to the leaderboard. For this purpose, these rides only have to be saved as JSON files.

Also, for all videos released from September, the video can be converted to MP4 during installation so that it can be used directly in Incyclist. This also adjusts the video name in the XML file.

Titran is a small village located at the very western part of the Frøya island. Placed far out into the Atlantic Ocean, this is almost as far out into the ocean you can get in Norway, without being wet.

Kalteck is the announced continuation of RLV Weißenstein. Two hundred meters east of a glass factory in Bodenmais, our route begins at a traffic circle. Both tours are also available in a double pack at a discounted price of 15 euros, so with 7 euros discount.

I have finally changed the difficulty rating of the videos from the proprietary (and Tacx-typically nonsensical) Cotacol points to the commonly used hardness level, such as used by Quäldich. This grade is determined by the sum of the (partial) lengths of a climb multiplied by the square of the respective average gradient. The values in RLV are usually somewhat lower than in Quäldich, because the elevation profile is smoothed for better driveability.

Give a gift voucher

RealLifeVideo.de is by far the most experienced independent provider of Real Life Videos. In over 15 years, well over 200 videos have been published and nearly 60,000 DVDs and downloads have been sold.

RealLifeVideo.de, that's me, Carsten Jost, an enthusiastic cyclist and software developer, and some external filmers who provide tracks from all parts of Germany and the world.