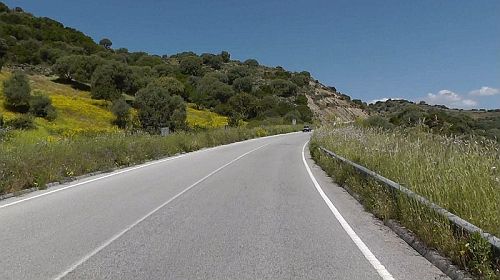 This Real Life Video was shot on Sardinia in Italy. The route leads around the Monte Albo massif on the east coast of the island. The start is near Capo Camino and the route leads over Irgoli and Loculi up to Lula and continues on the west side of the massif before it finally goes down to Siniscola where the purchase video ends. The complete circular route back to the start is closed with the free video Siniscola (as demo).

Unfortunately, very little flies were often on the lens, which show up as a shadow in the picture. I hope that does not matter too much - and somehow that's the way it is in the southern climes. You can get an idea in the free video and the preview.