Allos-Champs (Download version) Only until the end of the season 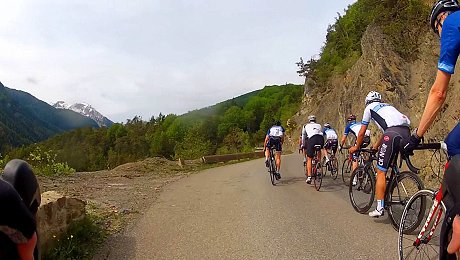 This RLV starts in Barcelonnette and follows the first half of the famous Allos - Champs - Cayolle loop. After a couple of flat kilometres, you start climbing the 17 km beautiful climb to the top of the famous Col d'Allos, a col that has been part of the Tour de France no less than 33 times. The whole team ride together for the first kilometres, before you and four other riders break free. Who will win? Well, you will have to find out yourself.

After the top it is time for some crazy downhill driving down the hairpins to La Foux d'Allos (actually top 10 on Strava :-) ). After La Foux d'Allos there are no more hairpins, but there is still lots of nice downhill racing down to Colmars, where the Col de Champs ascent starts.

Col de Champs was a part of the Tour de France in 1975, featuring a classic fight between Eddy Merckx and Bernard Thévenet. This is a steeper climb than Col d'Allos, and it is also very beautiful. When it was filmed, the road was not yet open for traffic. This time there mainly is a fight between you and one other rider. Unfortunately the battery on the camera was depleted just before the top, so the RLV ends 1.5 kilometer before the top. You still get most of the climbing, though.