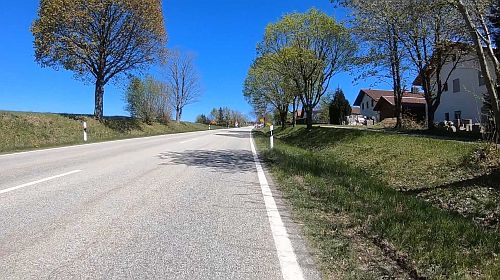 Ameisberg! Don't you immediately think of a small hill blocking the way somewhere in the plain. And indeed, the inhabitants of the Austrian Mühlviertel, where this "mountain" rises, have called it that because from a distance it looks like an anthill. But its summit rises to a height of almost 1000 metres. And it attracts attention, because the next higher mountains keep a respectable distance to it. It is not without reason that the cycling friends Obernzell, whom we accompany on this tour, have this ascent in their tour planning at regular intervals.

The starting point is at about 300 m on the Danube. And immediately a six kilometre long ascent begins. Afterwards, the legs have not much to do until the Austrian border in Oberkappel. But then up to the summit (after 27 km) the climbers are challenged. On the following descent, there is enough leisure to enjoy the landscape, because apart from a short ascent, the tour goes downhill via Putzleinsdorf, Hofkirchen i.Mkr. and Niederranna, until the tour ends after a ride along the Danube shortly before Passau.