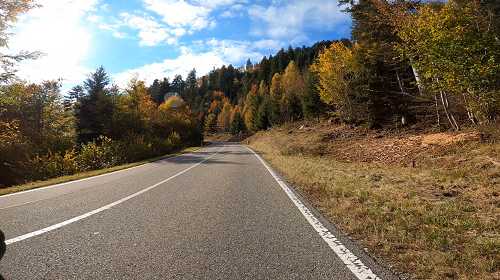 This is my first video filmed entirely in 4k. It partly covers the same route as the video of the same name from 2009, especially the climb to Dobel of the 8th Tour de France stage in 2005.

The route starts in Neuenbürg, goes along the Enz river for a short distance and then branches off to Dobel. After the approximately 6 km long climb with a very constant 6.5% gradient, the route then goes via Neusatz and Rotensol down to Bad Herrenalb.

Since there were playback problems with my test version in 4k published some time ago with some customers, there is the same route in this RLV also as a 1080p version. As a bonus, this one is also a bit longer, because it goes up to Bernbach and via Moosbronn back down into the Albtal.

Part of action 5 videos for 59 Euro