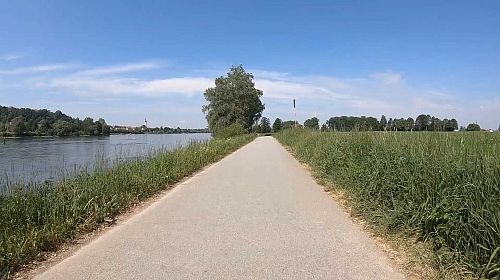 Who would have guessed? Since the 9th century wine has been cultivated on the slopes of Winzer. And that until the 19th century. One could call the place Winzer (at the Danube) one of the gates to the Bavarian Forest, if one wants to leave the Danube valley to turn to the Bavarian Forest giants, and then to depart from Tittling in the direction of Ilztal. In Winzer, the seriousness of this tour begins with a steep ascent of up to 14%. Nobody thinks of wine anymore.

The tour begins rather comfortably with a rapid descent from Salzweg to Passau. Right after the descent we make acquaintance with the Ilz shortly before its mouth into the Danube. We let the Passau townscape with its imposing cathedral and some bridges pass us by. When the unavoidable motorway feeder road is over, we essentially cycle along the Danube cycle path 27 km westwards to the said winegrower. The ascent is 1.3 km long, steep, becomes flatter at the top and ends after 4 km. Then it is time to relax until km 61. Only after km 73 the calves have something to do again. Tittling, the highest point, is reached. Up to km 76 we can enjoy the landscape. Then we have to pay attention, because it goes rapidly downhill to Kalteneck. On the following ascent up to Hutthurm we can again risk some side views before we enter the varied finale towards Straßkirchen and Salzweg.

The route is much longer than the old Ilztal-Danube video, with partly different roads and leads in the opposite direction.