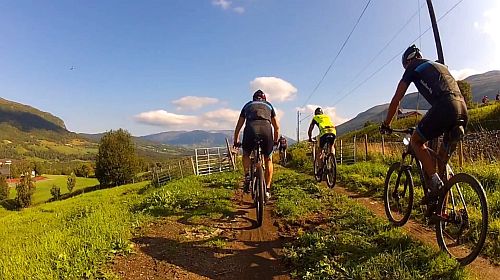 Sykkelenern (or just 'Enern') is a very popular Norwegian MTB / gravel bicycle race with close to 2000 participants every year. In this RLV, you will have the opportunity to run the race in its entire length. There is a lot of 'action' going on (riding with various groups), and you will have some nice views as you ride over the mountains. Since it is filmed from a bicycle, the video could be a bit shaky at times, but it shouldn't be too bad.

Making the singletrack parts realistic on a bicycle roller is a hard task. However, using different techniques (including an extremely detailed profile) these parts should have a 'feel' that is as realistic as possible.

The race starts and ends in Oppdal, under the Dovrefjell mountains. The first 10 kilometres are quite easy, following cart tracks in the Drivdalen valley, but you soon start on the long hill that takes you up the Vinstradalen valley. The first and last part of this hill is quite steep (rumors say you will see the grim reaper in the final part), but you will hopefully get a motivation boost by seeing that you pass a big bunch of other cyclists on the way up. You will also see that the nature changes on your way up; from trees and croplands in the beginning, to naked tundra at the top.

A few kilometres after the top of the hill is the start of the main singletrack part. This takes you to the top of Velvonskardet (the highest part of the RLV) and then down to Karilægret on the other side of the mountain.

Then you enter the Unndalen valley. The view here is quite spectacular, as you can see very far ahead. This part has a few hills, but is mainly quite flat. After a long, steep downhill, you enter the final part, which encircles Oppdal and contains a mix of surfaces; both singletrack parts as well as tarmac and gravel roads.

Part of action 5 videos for 25 Euro