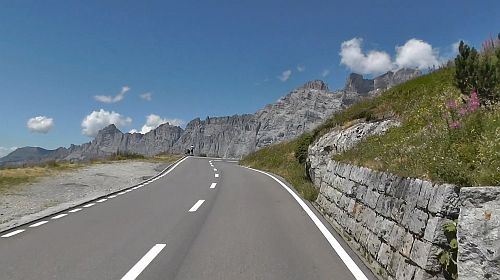 This RLV is a remake of the famous passes round in Switzerland, 9 years after the initial recording.

The route over the Furka pass starts in Hospental and you can roll it flat on a short distance before the road starts to rise to Realp. Here then starts the actual slope and the gradient is usually 8 - 10 %. After 7 bends the road leads at the right side of the valley through Tiefenbach to the Furka Hotel which is reached after 2 further bends. Until the actual pass, it is only a short flat piece. At the beginning of the descent there is a beautiful view into the Rhone valley with the ascent to the Grimsel pass and the Totesee. Passing the Hotel Belvédère you go down to Gletsch.

Here starts the ascent to the Grimsel, with 400 meters of altitude on 6 km at an average gradient of almost 8 % no great challenge. The pass summit announces the Totesee who has his name allegedly received from the dead of the Austrians and French that have been sunk here in 1799. A little later the pass is achieved, the environment can be denoted just as terrific - surrounded by huge granite walls, snow-covered peaks and many glaciers that go down in kilometers of reservoirs. The nearly 30-km downhill run lets us enjoy these glimpses extensively. By several, up to 500 m long tunnel, we drive down to Innertkirchen.

The Susten pass road runs mostly with just a few bends on the sunny hill side and the 14 tunnels do not disturb really (to the summit tunnel). But the slope is almost never more than 10 % and on average even with only 5 - 7 %, but with a total of 1500 altitude meters. After Innertkirchen the road is going up to Wyler and the Gadmertal. Ascends up to 9 % initially change with flatter sections. By Nessental and Gadmen we have a look on the Sustenhorn. Past the Hotel Steingletscher we finally pass the Steinsee with adjacent glacier. The pass is reached 2 km further and after the tunnel follows the 18-km descent to Wassen.