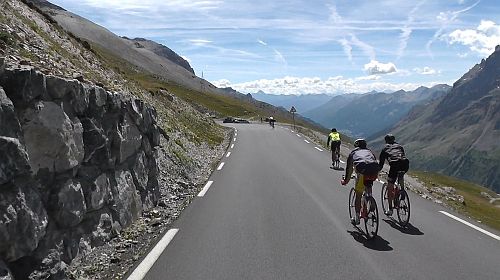 Actually, the Telegraphe Pass road is only the lower part of the driveway to the Galibier, but it also offers a 5 km descent, so you can consider it as a separate pass. From St-Michel-de-Maurienne it is curvy with 8-10% slope on the road to the top. The route leads through the wooded hillside and the pass itself isn't much more than a glade in the forest. The rather gentle descent to Valloire forces you to even pedaling.

The Galibierpass is often referred as "Roof of the tour". Alluding to the fact that it often represents the highest point of the Tour de France. In fact, it is the fourth highest mountain pass in the Alps. With an ascent of 1200 meters, it is a moderate bike ride, but together with the Telegraphe there are more than 2000 altitude meters and thus a quite heavy task.

From Valloire the tour starts immediately with a 12% ramp which is flatter only in Les Verneys before it goes on again after 5 km by 8% slope. After crossing the Valloirette the route continues through boulder fields on many turns and bends with up to 12% slope. Only towards the end the road is again straightforward, albeit unabated steep. The summit offers a breathtaking view of the Massif des Ecrins, a mighty bastion of granite and ice. After 9 km steep descent, the route ends at the Lautaretpass.