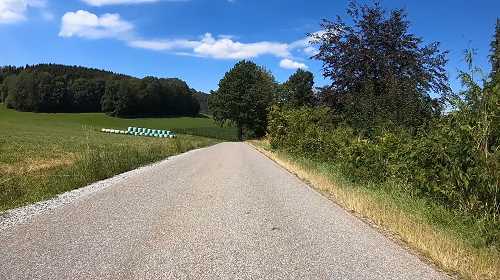 For sports fans, the focus is on the athletes' achievements. For the athletes themselves, in addition to success, its appreciation is also important. And so, for example, the winners of the respective winter sports disciplines are awarded crystal balls at the end of an exhausting season. These works of art are produced in a glass manufactory in Bodenmais.

This tour is the announced continuation of the RLV Weißenstein. Two hundred meters east of the glass paradise, our route begins at a traffic circle. After a short roll-in phase, a 'calf test' of about five minutes follows. Via Böbrach and Gstaudach we roll downhill to Teisnach. After we have crossed the Schwarze Regen there, the signpost at a traffic circle shows us our destination, namely Deggendorf. However, we do not take this congested main route, but choose the climb that takes us towards Geiersthal. After the town sign, a short descent and then it really gets down to business. In three stages, over 200 meters of altitude have to be overcome in 1.4 kilometers with high double-digit gradients. After that, the worst is over. After a short descent, we work our way up to 670 meters in topographically varied terrain to Kager.

There is not much time to recover. From Achslach begins a longer climb to Kalteck. There we move on 747 m in a skiing area. During the following 3.3 km long descent, charming views into the Danube valley open up again and again. Because of its tight curves, the route is especially popular with motorcyclists and also notorious due to provoked accidents. The curves end at km 31 and return to the usual undulating rhythm from Leithen before ending at the northern Deggendorf city limits.

This RLV is only available as a download version and for selected countries on USB stick. After payment is booked you will receive the necessary download link.

Contained in: Season 2023 Downloads
Also availaible together with Weißenstein for a reduced price of € 15.00.