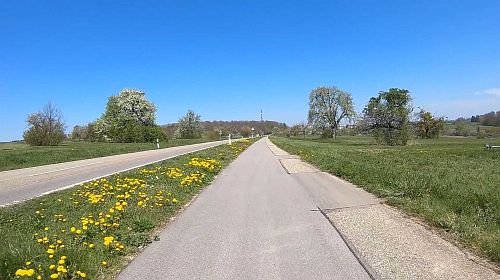 The Moosalb rises near the mountain hamlet of Moosbronn and flows into the Alb at Fischweier. The valley of the Moosalb is after Moosbronn except for a few old mills and farmsteads uninhabited and it flows through valley meadows lined with hillside forests as close as possible to nature. On the right side, the small river is accompanied almost along its entire length by a little used district road, on its left side by a hiking trail.

The valley and partly lower slopes of the Albtal and its small tributaries form the Albtal nature reserve and side valleys, in which numerous humid meadows and spring zones lie. Around this lies the landscape conservation area Albtalplatten and Herrenalber Berge, which covers almost the entire catchment area of the settlements on the edge heights.

The whole tour is significantly longer than the pure valley and starts at Mörsch from where it is initially flat to Ettlingenweier where the ascent direction Schluttenbach and Schöllbronn begins. After a short descent we meet the Moosalbtal, which we follow to Moosbronn. It goes to Freiolsheim a little further uphill, before we come via Völkersbach and Schöllbronn down to Ettlingen and back to Mörsch.