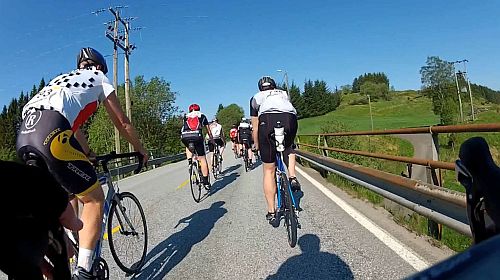 Nordhordland Rundt (meaning "around the northern part of Hordaland") is a bike race in western Norway, with about 800 participants every year. This is a good opportunity to see the wonderful landscapes near the sea on the Lindås peninsula and the islands on the western sea side.

The race starts in Alversund, and quickly crosses the bridge to the Radøy island. It continues north and passes the islands Fosnøyna, Ulvøyna and Bakkøyna, before entering the Lindås peninsula near its northern tip. It then follows the peninsula southwards and ends up not far from the starting point. The race goes through a varied landscape; a quite rough coastal landscape for the first parts of the race, when you are close to the sea, and more forest in the end, when you are further from the sea. The roads are mostly quite good, but there are also parts with narrow, bendy roads. There are some hills (particulary near the end), but this is mainly a quite flat RLV, where few hills are steeper than 4%.

This RLV is filmed from a bike during the race. This creates a very realistic RLV, where you can really feel that you are in the race.

*** Spoiler alert ***
You start in a small group and mainly follow that group during the first part of the race, before you and two others finally break free from the group. The three of you ride together for a while until one of the others has to throw in the towel, and there ar only two of you left. You continue to ride together until a steep, bendy downhill near the end, where some good downhill riding leaves the other guy behind, and you ride alone until the finish line.
*** Spoiler alert end ***

This RLV is filmed with two cameras; one pointing forwards and one pointing backwards. Most of the time you only see the video from the forwards pointing camera, but the backwards pointing camera fades in into the top right corner whenever there is something interesting going on in the back (it might be that there is some nice view that you don't see when looking forwards, or you can look back to see how many riders are still following you)