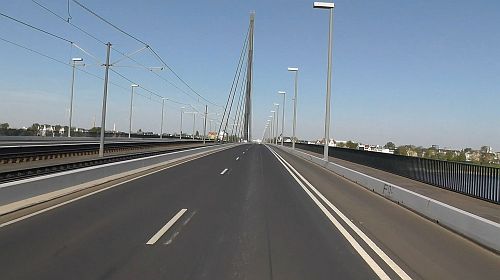 For the first time since 2005 (Karlsruhe, Pforzheim) the Tour de France visits 2017 Germany. And it's been even 30 years that the Tour was last started in Germany (West Berlin). With the Grand Depart in Dusseldorf an approx. 13 km long prologue is driven and then starts the first stage in the exhibition city on the Rhine. Even if the route is not yet fixed 100%, so should the video correspond to at least 95% with the final route.

The prologue starts at the Congress Center and then leads first along the Rhine, makes a short trip to the other side of the river before it passes through the famous Königsallee (Kö) again along the Rhine back to the exhibition hall.

The first stage starts in the old town (here missing some sections), then leads through the Waterfront (ditto) and by some municipalities before departing Dusseldorf. We climb the Grafenberg, go to Erkrath, by the world famous Neanderthal to Mettmann before we come back to Dusseldorf. Here we traverse once again the Rhine, before the track ends at the quayside.