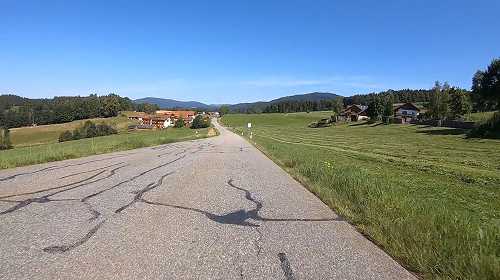 This tour takes us into the forest, or as the locals say: "in Woid". And by that they mean not only the forests in which their villages are embedded, but their entire forest region. Because the district of Regen, which is our destination, may adorn itself with the title of "most forested district" in Germany. And what does this have to do with Weißenstein? It is a castle ruin, which was built in the 12th century on the pile hill. Once we pass the romantic archway and let it roll towards the Regental valley, we'll be treated to a magnificent view of the district town of Regen.

We start in Iggensbach in the district of Deggendorf. Via Schöllnach and Englfing we have 8 km to roll in. Then the first endurance test up to Ernading. Then with a few snappers to Lalling. Here begins the main climb. Relaxation again after 5 km. Varied until the highest point at km 32. We reach Weißenstein at km 33 and the city of Regen at km 36.5. Until the end in Asbach it is an interval training. The tour should not actually end in Asbach. But a construction site ended it. Who is still curious how it would have continued, I may refer to a tour offered here soon, which is called Kalteck and leads from Bodenmais to Deggendorf.

Part of action 5 videos for 59 Euro